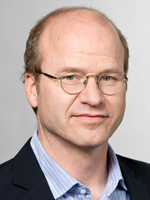 Admitted, the title is a bit of a catch phrase.   Nonetheless, I’ll try to explain a little bit of probability theory in a machine-learning realm.  And explain how deep learning comes in.  And how this can solve the intractability of some conditional probabilities.  And how we can use this in tactile sensor processing, or movement representation, or control.

Patrick van der Smagt is director of the Volkswagen Group AI Research Lab in Munich, focussing on probabilistic inference for time series modelling, deep learning, and a bit of robotics.  He previously directed a joint lab on biomimetic robotics and machine learning as professor for computer science at TUM and head of the ML lab at fortiss Munich.  Besides publishing numerous papers and patents on machine learning, robotics, and motor control, he has won various awards, including the 2013 Helmholtz-Association Erwin Schrödinger Award, the 2014 King-Sun Fu Memorial Award, and the 2013 Harvard Medical School/MGH Martin Research Prize.  He is founding chairman of a non-for-profit organisation for Assistive Robotics for tetraplegics and co-founder of various companies.